Facial Detection and Recongition in Perl

I just recently came across the new facial detection features in Picasa, and I have to say I am very impressed. This is a very useful feature and well implemented; once again Google has set the bar. Unfortunately, it is only available in the web version, and I have way too many photos to upload. Further, there seem to be more privacy concerns with a web version of a tool like this.

So, I was very excited when I saw a brief mention of presentation about OpenCV from a Ruhr.pm meeting (thanks to Yanick’s blog). Maybe this was the tool to implement facial detection/recognition in my photos locally. 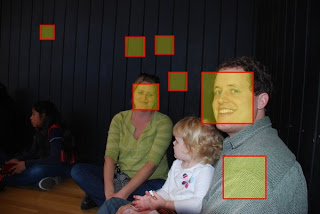 While there were many false positives and some missed faces, OpenCV and the script show promise. Most of the missed faces were either very small or profiles, and there is another “cascade” (essentially a set of configuration presets to the detection algorithm) that might yield better results for profiles.

Reading about facial recognition from the OpenCV site was a bit underwhelming, though. Apparently OpenCV only supports one method of recognition, Principal Component Analysis. Which sounds like it has some sever limitations. From the site:

Not exactly a great marketing pitch! PCA doesn’t sounds like the most suitable method for recognizing faces from arbitrary photos. I haven’t played with it yet, but that’s on the todo list.

The contents of this blog are licensed under the Creative Commons “Attribution-Noncommercial-Share Alike 3.0″ license.